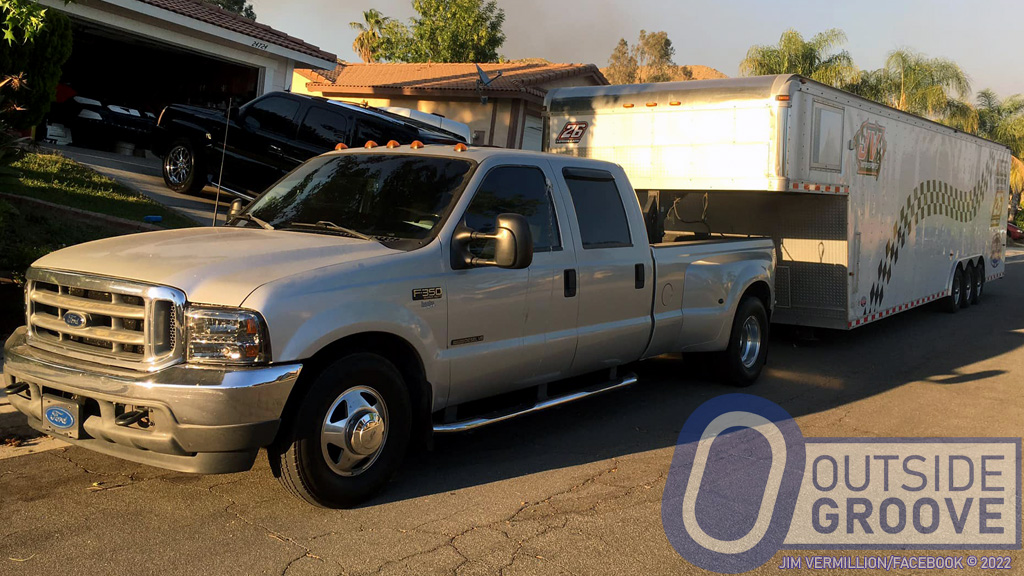 On Saturday, Jim Vermillion heads into the final street stock race of the season at Irwindale Speedway four points out of first. He’ll have to contend for that title without his own truck, trailer, and an estimated $50,000 worth of tools he carried in them.

Vermillion operates a four-bay shop building race cars and hot rods in Hemet, California. On Monday, he arrived to work to find his Ford F-350 dually pickup and the racing trailer attached to it missing from a secured yard. Fortunately, his race cars remained safe in his shop.

On Wednesday, Vermillion received messages on Facebook from friends who had spotted his truck and trailer. The next day, he had his truck and trailer back — but stripped clean and altered cosmetically. They found them 10 minutes away in Homeland, California. The truck was in a field and the trailer on a dirt road in a hidden valley heading into the mountains.

Thieves had broken the trailer’s doors off.

“I had more than $50,000 worth of new parts and tools in the trailer, and I had irreplaceable pictures of my deceased parents in the truck — all were gone,” said Vermillion. “Even all of our team uniforms were gone. They were red and black, with ‘JV Motorsports’ on them.”

Among the missing equipment included a pit box, Longacre wireless scales, 10 Motorola radios with six headsets, Snap-on and Craftsman hand tools, a spare MSD distributor system with a FAST ignition and coil mounted to an aluminum plate, a VDL carburetor, and a reverse-mount bell housing and reverse starter from Quartermaster.

“We all know one another in the racing community, and the thieves are too smart to try to sell the tools or parts to one of us,” Vermillion said. “We have people working on finding who the thieves are. That’s all I can say.”

Racing friends have loaned Jim Vermillion a truck and trailer to get him to Irwindale Speedway on Saturdays, as well as parts. The theft has shook the racing community, according to Vermillion.

“Right after this happened, other racers called their insurance companies to get fully insured,” Vermillion said. “I had insurance, but it was $300 a month, so I let it go. Now, in the long run, that $300 doesn’t seem so bad. My building is alarmed, but the trailer wasn’t. The next thing I will do is get the trailer and truck alarmed, and put GPS in them.”

Vermillion is offering a $5,000 award for information leading to the apprehension of those who stole his truck and trailer. You can reach Vermillion at 704-797-1000.