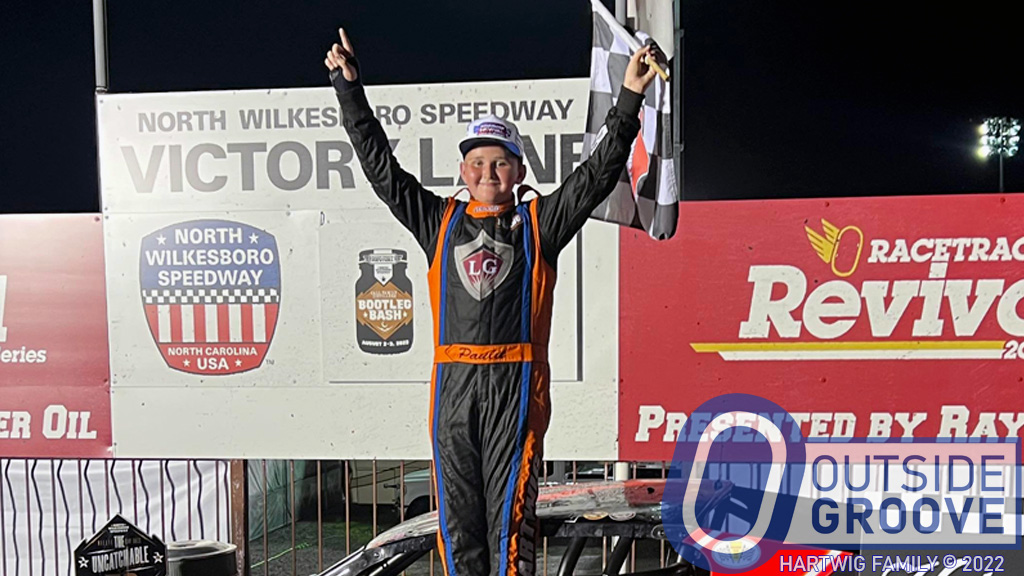 When North Wilkesboro Speedway reopened, 11-year-old Paulie Hartwig III became the youngest driver to ever win at the historic North Carolina oval dating back to 1947. He topped a field of seasoned crate modified drivers not once, but twice. Not only did some of those drivers have more experience than Hartwig had years, but also far bigger budgets.

“If you can’t believe he’s an 11-year-old with talent, compare his car with the ones he’s racing against,” said his father Paul Hartwig Jr., of Galloway, New Jersey. “Our equipment is not even close to that of the cars we go up against every week.

“We have an HEI distributor. They have an MSD ignition.

“We have a standard spool rear. They have a Gleason.

“We have an old Muncie. They run with a Jerico transmission.”

Paul, a successful racer in his own right, has mentored his son throughout his young career, which began in .25 midgets when Paulie was four. In those cars, he won a USAC national championship in 2018 and 2019. Paulie then tested in his father’s modified at age nine. After that, Paul reconfigured his car to accommodate his son’s small stature. Paulie started competing in the full-size sportsman modifieds last year.

“We had to modify the pedals so he could reach them,” Paul said. “The seat is pretty much in standard position.”

Paul says his son is an astute observer of the sport, which helps his success.

“He grew up watching and studying Matt Hirschman,” said Paul. “Paulie learned to have the skills to save the car and his tires for the end of the race. He waits to the end of the race to make a move, then he goes after the lead.”

Some criticize Paul for putting his kid into a full-sized car at a young age. He countered that argument.

“Most of the other drivers respect him,” Paul said. “Only a handful say he is too young to be racing. Burt Myers and Paulie had great conversations, as he also did with Matt Hirschman.”

Paulie Hartwig, a quiet, soon-to-be sixth grader, had few words after his win.

“I was really excited, and I got out of the car and hugged my parents and stuff,” said Paulie.

“He doesn’t even realize he just made history,” Paul said. “He’s quiet, and he doesn’t even know his capability behind the wheel. He just gets out there and drives. He’s a kid outside the car, but when he is strapped in, he is 100% focused on driving his race car.”

Paul said they plan to return to racing primarily at a pair of Pennsylvania ovals — Evergreen Raceway in Drums and Mahoning Valley Speedway in Lehighton. Later in the season, they hope to return to North Carolina for the North-South Shootout at Caraway Speedway.

“As long as the mortgage is paid, we can go racing,” said Paul. “We’re a family-owned team. We’re not sure what the future will bring. We’ll see what comes about.”