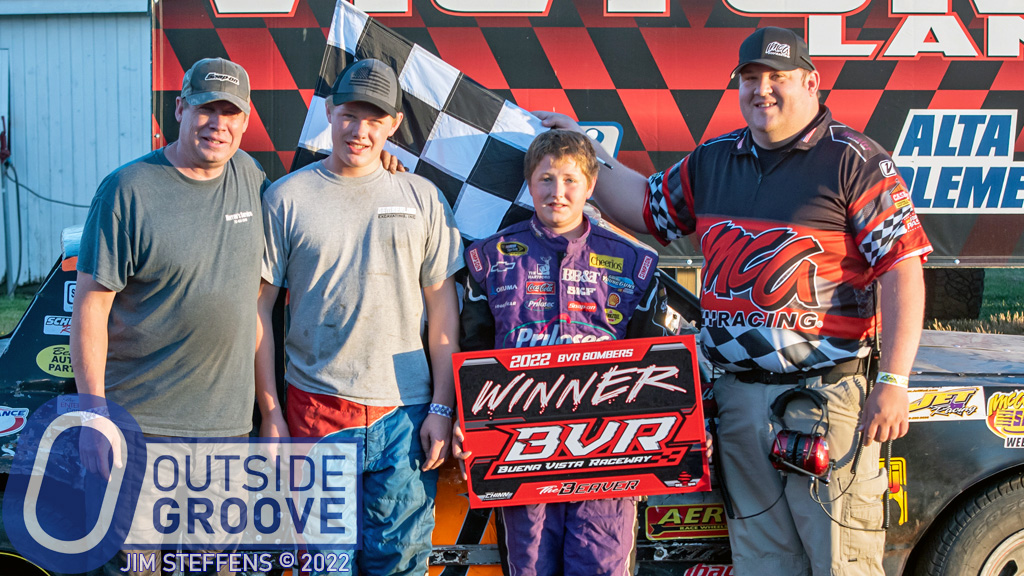 Last Wednesday, Will Smith became the eighth Smith in his family to win a feature. The triumph occurred in his second-ever start in the bomber class at Buena Vista Raceway in Alta, Iowa.

David, 50, also races. He competes in the IMCA stock cars. David holds 20 track championships and is six wins away from his 200th IMCA feature victory. His five brothers race or have raced, too. Donavon, Devin, and Doug compete with David in stock cars. Doug also races modifieds. Daniel and Dustin used to race, with the latter building chassis now. (Read more about Dustin’s business in this article, “K Chassis: Dustin Smith’s Winning Venture”.)

“My dad said I should be careful and have fun, and I did that,” Will said. “He told me if something happens on the track, it just happens and there is nothing you could do about it.”

Will choked up with tears of joy when his father joined him in victory lane.

“The first night he raced, I told him the main thing to do was to watch the other drivers, and see what they do on the track,” said David. “I told him it is good to take advice and just as important to ask questions if you don’t understand something.”

Although a rookie behind the wheel, Will’s no stranger to the pits. He’s helped his father David and brother Michael for the past few seasons.

“Learn by watching is the most important advice I gave Will,” David said.

As much as winning means for the Smiths, it isn’t everything, according to David.

“I told [Will] to be a good sportsman on the track,” said David. “Never let temper determine what you do on the track. Racing has its ups and downs, and you have to accept that. Things could change for the better or worse at any time.”

With championship guidance like that, many expect more wins from Will Smith. However, before he goes for win No. 2, Will planned to celebrate.

“We’re going to Adventureland on Friday,” said Will, with the excitement of a young teen.