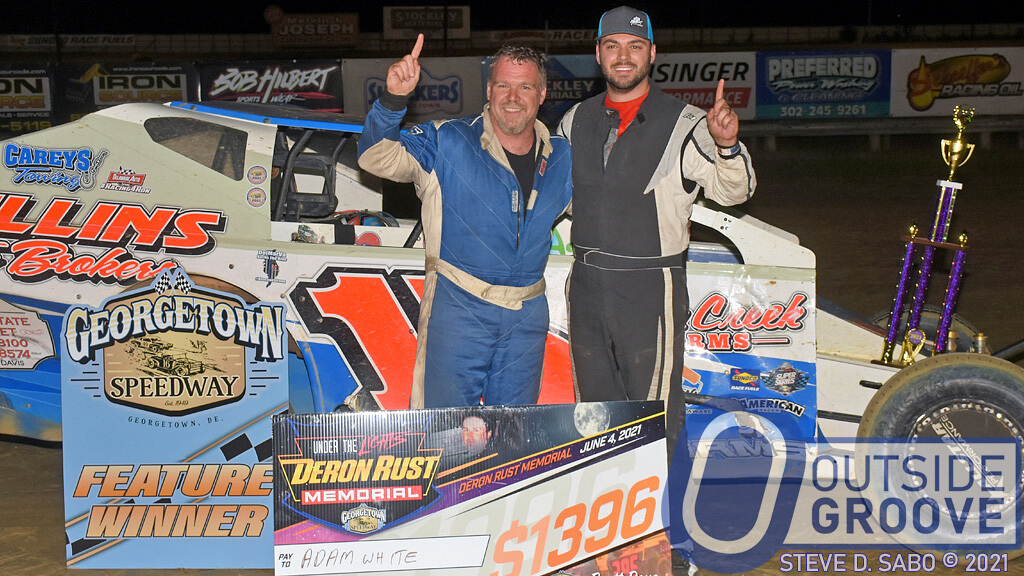 Adam White (pictured right) scored the biggest victory of his career last Friday. He surged from a 16th-place start to win the crate 602 sportsman portion of the Deron Rust Memorial at Delaware’s Georgetown Speedway. It reminded White of when his father, Michael (pictured left), won one of his biggest races at the track in 2007.

“Both wins were on one of those nights when the stars aligned,” Adam, 26, of Laurel, Delaware, said. “[Back in 2007,] I was a 12-year-old who played baseball. My game had just finished and my mom, Angela, rushed me to the track in time to see the feature. Two cars pressured Dad right to the finish. My win came after crashing in a heat race and getting the car fixed five minutes before the feature.”

With no consi, Adam started in the back of the pack. He made a charge to the front on the outside, snagging the lead after a lap-10 caution.

“We broke the yoke of the transmission in the heat race,” said Adam. “After that, I told myself if I could start and crack the top-10, I would say it was a good night.”

For the Whites, Adam’s Deron Rust Memorial victory provided a sign that their tumultuous 2020 may be getting smaller in the rearview mirror. Adam’s mother and Michael’s wife, Angela, received a stage 3 colon cancer diagnosis last year.

“Angela had her last treatment at the end of February,” Michael, who races with Adam in the crate 602 sportsman class, said. “She’s healthy — the cancer is gone and we hope it stays gone. She’s still tired from her chemo treatments, and they said she will regain all of her strength in the months to come.”

The 2020 year offered many ups and downs for the White family. (See “Michael White: Happy to Have a Reason to Celebrate”.)

“Last year was an emotional roller coaster,” said Adam. “We had a high at the finish of the year. I won the [Delaware International] Speedway [in Delmar] championship and Dad finished second.”

Adam White and the rest of the family view 2020 as a time that made them a bit stronger.

“You never know what life is going to bring you,” Michael said. “To overcome the lows and see your life come full circle is a great feeling.”