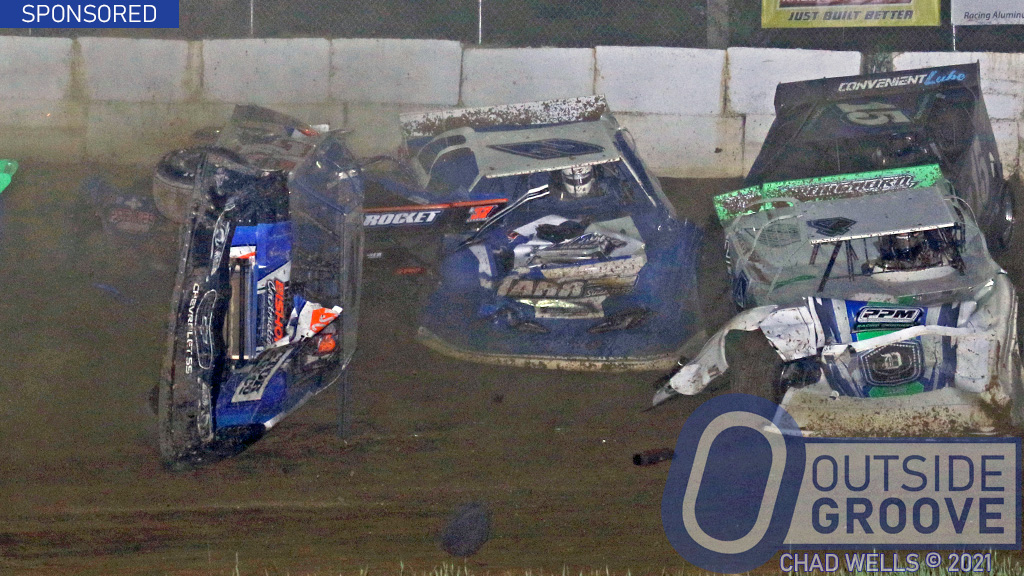 Tyler Price found out the hard way that Wartburg Speedway in Tennessee narrows up quickly when trouble occurs. He, among several others, were caught up in this wreck during the American All-Star Series presented by PPM Racing Products feature won by Booger Brooks. (See “Booger Brooks: The Racer You Can’t Forget.”). Price rolled his late model as he tried to avoid calamity.

“It was the ‘Big One,’ for sure,” said Price, 18, of Greenback, Tennessee. “When the two cars spun in front of me, the whole track was blocked. I slowed down and the No. 4 car [of Austin Langley] hit me in the side, and my car began rolling. I took quite a ride.”

Fortunately, he walked away from the crash without injury. He sat in a ButlerBuilt full-containment seat, with a RaceQuip five-point harness. He wore a Bell GTX helmet and a Simpson Hybrid head-and-neck restraint.

His car, a Rocket XR-1, also fared well after the accident.

“Luckily, it was all body damage,” Price said. “We had only minor bolt-on chassis part damage. We’ll be back this week.”

The former go-kart racer moved into crate late models after buying a car in 2019. Tyler Price plans to race the American All-Star Series when they tour near his hometown. Otherwise, he attends events mostly at a trio of Volunteer State tracks: 411 Motor Speedway in Seymour, I-75 Raceway in Sweetwater, and Smoky Mountain Speedway in Maryville.

“I hope to climb the ladder in this sport,” said Price, who graduated from high school in December. “Right now, we are focused on doing well in the crate late model division. I’m also looking to work for a team or in a race shop to further educate myself in racing.”

This weekend, the American All-Star Series presented by PPM Racing Products races in West Virginia. On Friday, May 7, they head to Princeton Speedway. For Saturday, May 8, Beckley Motorsports Park hosts a $10,000-to-win special.