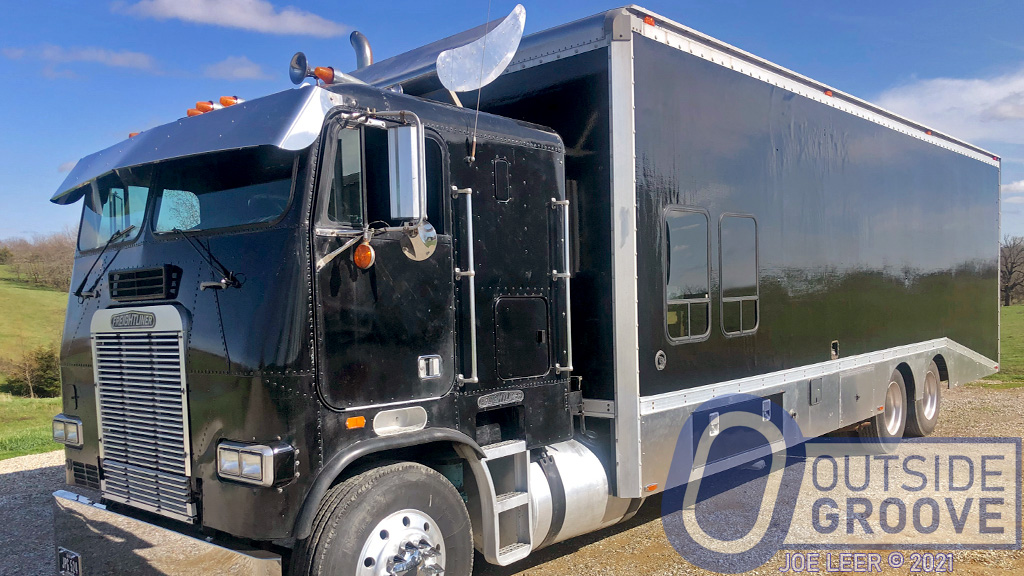 Joe Leer made the best of his time when the pandemic slowed down his world. He built a slick, retro race-hauler that he dubbed “The Black Momba.” It hauls the wingless sprint cars driven by his daughter, Katlynn Leer.

“I started on the project in February 2020 and finished this past weekend,” Leer said. “It was a labor of love. I don’t even begin to know how many hours we spent building it.”

The Leers hail from Moulton, Iowa, but attend many POWRi and USAC races in Missouri, Illinois, and Indiana. They determined a live-in hauler would be an economical solution for all the travel they do.

Leer started with a 1985 Freightliner cab-over chassis he found in California. It cost roughly $30,000. In its previous life, the Freightliner delivered Ferraris.

“It was basically a cab and chassis, with a box,” said Leer. “The engine, a Caterpillar 3406B diesel, was in good shape.”

Leer drew upon his experience in construction to customize the truck. He enlisted friend John Flanigan, a finish carpenter to help him. Katlynn and Leer’s sister, Mary Leer, helped also.

Leer estimates he put in $30,000 in improvements to the hauler. The group of friends and family finished the cabin in knotty pine and it now sleeps three. It has a built-in refrigerator, microwave oven, sink, and toilet.

“We searched camper-supply houses for everything we needed to customize the cabin,” Leer said.

The box has a built-in 5KW generator and an air compressor. It is trimmed with LED lighting and has a Bluetooth speaker system. To give the truck a unique customized exterior, Leer purchased chrome bumpers, trim, and spoilers from truck parts and accessory vendors.

“I’m not even finished yet,” said Leer. “I’m installing underglow lighting and a big-screen TV. Then, the project will be pretty much complete.”